Perspective is key. Things will happen in our lives regardless of how much we plan for them (or don’t), and I've come to a point where I believe that perspective/perception of these things determines how much they affect us. We all filter our lives through our unique worldview and set of past experiences, it’s how we operate as human beings. This is especially relevant when it comes to food. We are socialized throughout our lives by our families, friends, peers and the media to feel a certain way about food. The more I learn about food, the more I realize how ingrained some of these messages our in our own minds and also throughout the medical community.

I've been listening to old Rich Roll podcasts for the last few weeks and have heard some great discussions with Thad Beatty (Sugarland guitarist who’s now a vegan Ironman), Dr. Garth Davis, and Dr. Michael Greger. Thad talks a lot about his family and their transition to plant based eating. He made such a good point, that as American’s we’re socialized to believe that certain diet related ailments are “normal”. I think back on my own life and all the things I thought were normal, or something genetic. As a preteen I went through a struggle with what was diagnosed as Irritable Bowel Syndrome and had to drink these orange flavored Metamucil drinks twice a day. As a teenager I took lactaid pills regularly, even as I continued to eat dairy with almost every meal.

As I gained weight I started experiencing muscle and joint pain all over, but particularly in my knees. I used to get regular sinus infections, was stuffy a lot of the time, and generally had low energy. Now I know that all of these symptoms and illnesses relate directly to diet. It seems so obvious, but it really isn't. Almost every podcast I listen to, or story that I read about someone shifting to a plant based diet contains that aha moment where we realize that conditions considered part of the “normal” experience of being human were actually directly attributable to the decisions we made about what to put in our bodies.

Dr. Garth Davis’ talk with Rich Roll focused a lot on his training as a physician, and his work as a doctor who performs gastric bypass surgeries. He talks about the dearth of training about nutrition in the medical field (echoed by Dr. Greger in his appearance), and the prevailing attitude that humans are naturally prone to certain conditions. The most widely used pharmaceutical in the US is for treating high cholesterol. This is crazy to me now knowing how easy it is to lower your cholesterol by making dietary changes. I realize there is a genetic component to cholesterol, but it’s nearly impossible to have high cholesterol if you’re eating a plant based diet.

Dr. Davis also discussed the common mindset in the US that eating a vegetarian or vegan diet is a radical form of treatment, but cracking open your chest or cutting out sections of your stomach isn’t. I found this picture on a blog this week and had to share it: 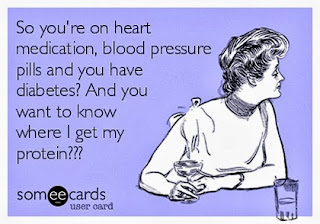 When you think about it in those terms it makes you wonder why people are so afraid to try plant based eating. I think the main reason is that people think they’d feel like they were missing out on things if they did. I’m not going to lie, there are times when eating plant based makes life difficult. Group dinners, social events, etc. don’t always make for the best dietary environments for those of us who are plant based. I consider that minor though in relation to how much better I feel, look, etc. Also, food tastes so much better to me now. I never experienced the sweetness of a carrot or the depth of flavor in raw corn cut off the cob until I stopped eating the fake foods that were tricking my taste buds with added sugars, salts and fats.

One last thought on this line before I wrap up. Our dog was acting strangely a few weeks ago. She was lethargic and would yelp in pain if you tried to touch her back or pick her up. She stopped jumping up on the couch/bed and wouldn't want to go for walks. All very atypical for a beagle. We called the vet and he asked if she was still eating, drinking, and going to the bathroom normally. She was. He said if she didn’t have a temperature that she was probably fine, and only to bring her in if she had a fever or stopped going to the bathroom.

She recovered and then it happened again. We found out that aging beagles (she’s almost 8) are prone to back problems, and that she is likely injuring her back when she gets overly active. We now have muscle relaxers and anti-inflammatories that we can give her if she needs them. The moral of this story is that for our pets, not having regular bowel movements is a sign of serious health problems, but for most people bowel related issues are seen as no big deal! I know so many people who struggle with constipation and think it’s fine that they only poop once every few days. Likewise, I myself experienced irritable bowel syndrome. No one in the medical field ever recommended dietary solutions to this problem, and no one seems to think it’s strange that they don’t have regular bowel movements.

There’s a joke in the vegan community that you know you’re a vegan if it takes you longer to pee than to poop. It’s funny and it’s also true. I have regular bowel movements at least three times a day, usually around the same times. It’s amazing how well your body will work when you treat it with respect!
I hope that as the plant based movement gains momentum people will start to develop new ideas about what is normal, and to understand that many of their ailments directly relate to what they put in their bodies. I know it’s not realistic to think that everyone will switch to a plant based diet, but I think everyone would benefit from decreasing consumption of processed foods and increasing their intake of dark leafy greens, vegetables and fruit. It’s really not that hard, and it tastes good too!