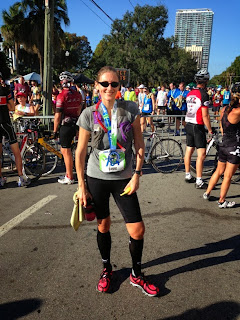 Yesterday was one of the best days of my life. I completed my first half marathon in 2:16:56. I finished 1784th out of 3344 finishers, and 734th out of 1763 women. Now that the big questions have been answered, I’m going to recap my day. I am really writing this for myself, but hope some of you will enjoy it.

We set the alarm for 5AM and were out of the house by 5:50. We got near the start by 6:20 and I put on my compression socks in a parking lot. I gathered my things and walked into the park where the race started/finished. Carly left to get breakfast and find a cheering spot (more on that later). I got in line for the park’s only real bathroom and waited about 20 minutes. While I was in line I ate a banana. One of my favorite moments of the day happened then – a group of 10ish year old girls were in line ahead of me, and one shyly tapped my arm and told me she liked my shoes. Adorable. And it helped relax me and realize that no matter what happened it would be a special day. 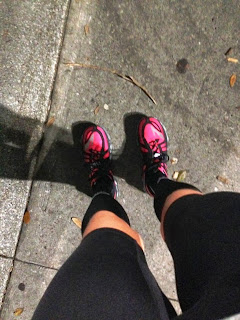 I made my way to the start area and tried to walk briskly for a warm up. As I got to the start area they had just started announcing that it was time for the half marathoners to line up. I set myself in between the 9 minute and 10+ minute mile signs and did a final check of my vest and my phone. I also ate a date for a quick burst of energy to start with. I made a half marathon playlist that I had cued up to start when I crossed the start line, and I put my phone’s metronome app on about a minute before the 7AM start. I don’t remember exactly how they announced the start, but I didn't make it across for over a minute. 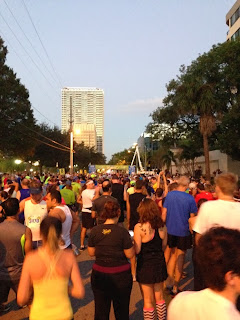 The only race I’d ever done prior was a 5K as part of a work event with 150 participants, so being in a crowd of over 3000 was incredibly intimidating! The first two miles were totally surreal and I had a tough time getting used to running in a crowd and keeping my own pace. In those first two miles my pace (according to Garmin) varied from 9:20 to almost 12:00! After about two miles I was able to settle my nerves and get into a groove. The time passed quickly through 5 miles. I found my pace and was hovering between 10 and 10:15. One thing I loved about the race was that all the mile marker signs had motivational/funny slogans. My favorite of the day was “Sweat is just fat crying”.

The course also had bands and musical performances about every two miles. They had a bagpiper, amazing Japanese drumming troupe, and some live rock bands. There were people cheering at almost every blocked intersection, and tons of people watching us from their front lawns. The support and camaraderie was incredible, and I did my best to say thank you to as many people as possible. I stuck to my usual fueling plan and took a swig of mango puree somewhere around 5.5 miles. I think that’s where I made my big mistake.

First, I only tried using puree once before on my last long run and it was a less acidic flavor. Second, I was running around 10 minute miles at that point and didn't slow down much to eat, whereas I usually am running closer to 10:30 or 11 minutes while I eat. Shortly after the mango I started feeling a side stitch. As Wikipedia describes it, a side stitch is “is an intense stabbing pain under the lower edge of the ribcage that occurs while exercising”. I used to get side stitches quite often when I was first starting to run and do the Couch to 5K program. I haven’t had one in the whole time I've lived here (over 6 months), and when I started to feel the pain that early in the race I almost started to cry.

In the past when I got them I would do my best to breathe deeply, relax my diaphragm as much as possible, and rub the pain out. Most of the time though, I’d be in so much pain that I had to stop running. I was so early in the race and terrified that I wouldn't be able to finish or would have to walk. I immediately slowed down my pace and tried all the strategies I listed above. Unfortunately, nothing worked, and the pain stayed with me for the entire race. After I realized I could still run and not double over I started playing a mental game. I told myself to accept the pain and stop trying to fight it. I told myself that I would still finish and that I would give myself permission to walk if I had to.


By this point I was nearing 7 miles and knew Carly might be there rooting for me. As I got near the live band I could see people cheering and I found her! She made me this amazing sign, and our friend Jen came out to cheer with her – a total surprise! I had planned to walk over to her if I found her and tell her about the stitch, but I changed my mind because I got such a burst of energy from seeing them. I ran over and gave Carly a kiss and kept running. 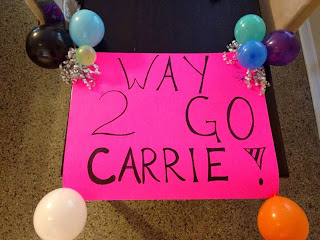 I did fine through about 8.5 miles, and then we turned a corner into a long long hill. For most people it probably wouldn't seem long or steep, but I literally have NO access to hills on my running route. It’s quite flat here in central FL and I didn't do any hill training. Another mistake! I probably pushed too hard on that hill because later in the race my quads were hurting. That never happened on my training runs. My calves and feet would usually get tired by 10 miles, but never my quads! There were several short but semi-steep hills from miles 9-10.5 and I did my best to attack them without ruining my legs. I ate a few dates along the way, can’t really remember when. I was afraid to have more mango puree! Around 10.5 miles the course turned to bricked streets, and that’s about where I lost my groove.

The 2:15 pacers caught up to me and I was happy because that was my “reach” finish time (whereas 2:30 was my “I’d be happy with this time”). Before the side stitch I felt like I could pull off a 2:10, but those hopes were dashed. The last 2 miles were really tough. My side hurt, my legs were killing me, and I had trouble keeping a good pace while running. It was also much warmer than any of us expected. By that time of day it was probably already 75 degrees and sunny! I grabbed water from a station and poured it on my head. I took a few walk breaks and watched the 2:15ers get ahead. Fortunately, the last miler was lined with a live DJ and hundreds of people cheering. One volunteer from the race organization made a point to call out my name (our bibs had our names on them), and that gave me a huge boost. The finish was about 4 tenths of a mile after a turn, and I did my best to turn it on for that last section. 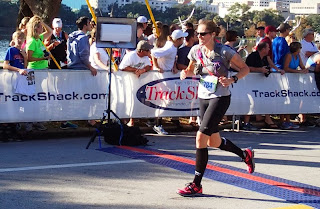 As I neared the finish I spotted Carly and Jen and blew them a kiss. I sprinted through the finish even though I was miserable. I walked a bit, got my big medal, and made my way to a clear spot on the side of the street. There was a long row of fencing along the start/finish area and I stopped to stretch while I waited for Carly and Jen. I got my electrolyte enhanced water from Carly and grabbed a free banana but couldn't eat it yet. We all walked to the port-a-potties and went to the bathroom. After that we took a few pictures, and then made our way to the after race party area. 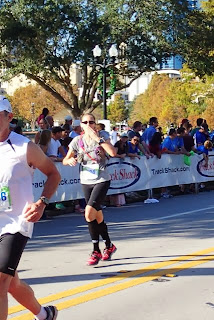 My first mission was to get ice wrapped on my calves. Carly also hunted down an ice pop for me. Those were both crucial, I was feeling nauseated and overheated. Carly checked the race board and found out my official time, and I was super stoked to be so close to 2:15 even with a side stitch. We wandered around a bit and I started re-fueling with a Bonk Breaker bar. I sat on the ground with my ice and that was probably a bad move. I started cramping in both legs and my cheerleaders helped me rip off the ice, socks & shoes. Carly rubbed my calves/feet to help the cramping stop, and we decided to slowly make our way to the car. 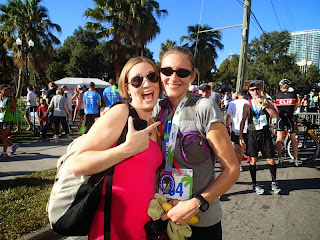 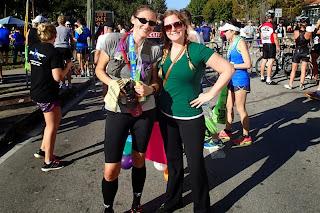 We spent some time at home resting and getting clean, and then went out to Winter Park to celebrate. In the course of the night I had sushi, hummus, pizza, salad, and raw vegan cake plus a few delicious cocktails. My co-worker, fellow runner, and new friend Kelly came out to celebrate, and Jen and her boyfriend came along later in the evening. We spent most of the night sitting out doors, talking and laughing through our meals. It was the perfect way to cap off the day.

Even though most of the race was mentally and physically challenging, the experience was one of the best of my life. Running through the finish, hearing my name called and being surrounded by people cheering was a feeling that would be hard to replicate in any other setting. I think it’s safe to say that I have the running bug, and I will definitely be racing more in the future. I am already signed up for the Best Damn Race 10K on March 1st, and am eyeing a sprint duathlon at the end of January.

As I was describing moments from the race to Carly on the way home I started crying. I was and continue to be overwhelmed with gratitude. I am grateful for a supportive partner, great friends, family cheering/tracking me from afar, all the people that donated their time to come cheer, give out water and supplies, play music and encourage the runners, and to my body and mind for allowing me to have this experience.


The people who knew me in 2007 when I could barely walk up two flights of stairs are astonished that I achieved this goal. I am too. When I started running (after about 160 pounds of weight loss), I could only jog for a minute without needing to walk. When I moved to Florida in May of this year, the most I’d ever run outdoors was about 3 miles. I fully believe that anyone can lose weight, and anyone can learn to run/bike/ski/swim/achieve their athletic goals. It is not easy. I've made a lot of sacrifices, and have had to work incredibly hard. That being said, being able to tell people that I ran a half marathon is a feeling like no other and is definitely worth everything that came before. 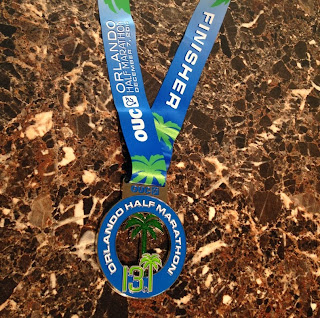